With so much content in the world today, it's kind of hard for promos to get viewers engaged. The context of a promo (or advertisement) has an effect on how it performs. When it comes to VICELAND, a network with alternative content and a rabid fanbase, the hypothesis is that brands who advertise on their channel can more deeply engage their customers. In order to enhance the pitch of the ad sales team to Under Armour, it was important to show the difference in recall and brand perception that VICE content creates. So the research question was whether or not Under Armour’s new ad performs better within VICE content as opposed to other channels with news / reality / documentary content.

For this study, our Dynamic Recruiter captured a panel of 300 viewers. We implemented complex quotas that split respondents up as 50% VICELAND's viewers and 50% general TV viewing population.

As an in-context ad study, we used the Pilotly dashboard to create two video reels. One reel contained a 10m episode of a VICE episode, Most Expensivist, as well as an ad-break which contained our brand ad as well as additional ad control stimulus. The other reel contained 10m episode of a show that’s in a similar vein as VICE’s Most Expensivist, CNBC’s Secret Lives of the Super Rich, while also having a similar ad break setup but just with a CNBC on-channel ad to start. Each of these reels were setup as Feature Assets (or pods) in the dashboard, and 150 panelists were placed into each pod. Within that 150, we also had the 50/50 split between VICELAND viewers and gen-pop TV viewers.

For panelists, they entered into one of the two pods as chosen by our algorithms based on quota status and began an intro survey that allowed us to profile the viewing habits and content interests of the panel. Panelists then entered the screening, during which they interact with sentiment buttons to indicate their level of enjoyment and engagement. Finally the exit survey allowed us to capture interest in the show (providing context for attention level), while also surfacing both unaided and aided questions around what they recall from the ad break as well as how it made them feel about the respective brands.

The Under Armour (UA) target advertisement performed better overall among VICELAND Viewers who watched VICELAND content, even when compared to VICELAND Viewers who watched the general market content (Secret Lives of the Super Rich). This meant better brand perception and higher likelihood to take action as a result of the UA ad. For gen-pop TV viewers (which by nature contains VICELAND viewers as a subset), the ad had an equally average performance in regards to brand lift, recall, intent regardless of which pod the viewers watched. Our control advertisement, National Guard, performed similarly in both pods for both audiences, providing additional context that the brand itself was also more of a match for VICELAND viewers. This was additional support for why Under Armour should place media for their upcoming shoe campaign on the VICELAND network. 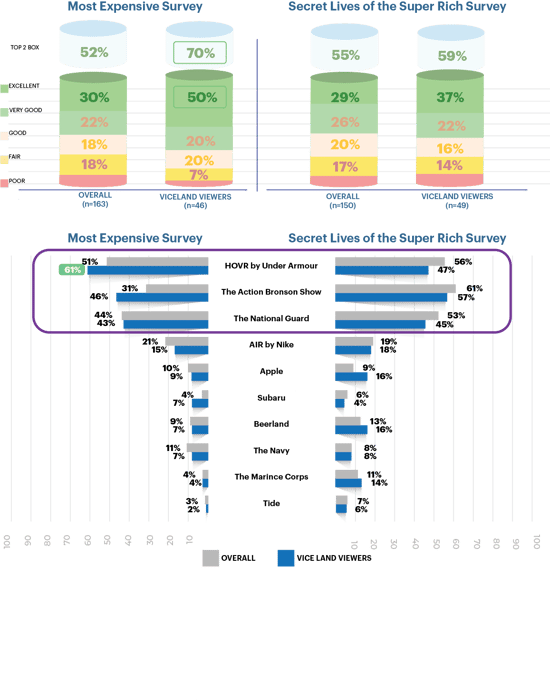 Get Feedback on Your Trailer or Promo Today