For decades, the pilot test has been a standard for television creators. This concept has been challenged in recent years, and rightfully so since the composition of long form entertainment has completely changed in the past 15 years. Nonetheless, the first episode of a series is the top of the funnel to get viewers engaged for seasons to come.

The goal of the McMafia pilot study was to understand how the viewing audience of AMC, and cable TV in general, responded to the show's premiere episode. In addition, it was important to understand which characters or elements of the show stood out to viewers that were accepting of the first episode. The insights collected were to be used to offer guidance in the creation of marketing materials and media strategy.

For this study, our Dynamic Recruiter captured a panel of 200 viewers ages 18-49 who regularly watch cable TV. All viewers were required to be regular viewers of story-driven dramas, and at least 50% of the panelists must have watched AMC in the past month.

As an episode study, the first step was an intro survey that allowed us to profile the viewing habits and content interests of the panel. Panelists then entered the screening, during which they interact with sentiment buttons to indicate their level of enjoyment and engagement. Users can also press a tune-out button, upon which they are asked to describe why they lost interest. They can opt to tune-in again if their interest was recaptured. Finally there was an exit survey, which allowed us to evaluate overall show interest, character likability, story flow and pacing, among a few other nuanced insights.

Overall, the pilot held viewers' attention because they enjoyed the story as well as the fact it was full of action and drama. The international setting / scenery, and character development were big attractions to most.  On the other hand viewers were frustrated having to read subtitles, a challenge that many international shows can run up against.  In addition, the story moved at a slow pace to viewers as well despite the level of action. The lead character, Alex Goldman, was very well received and was most often described as likeable and intelligent. His key relationships with the other main characters were all received well too.

Men and older women 35-49 were most interested in watching the next episode of McMafia, while women 18-34 were least interested. Half of the non-acceptors indicated they would watch the show if there were some improvement made. 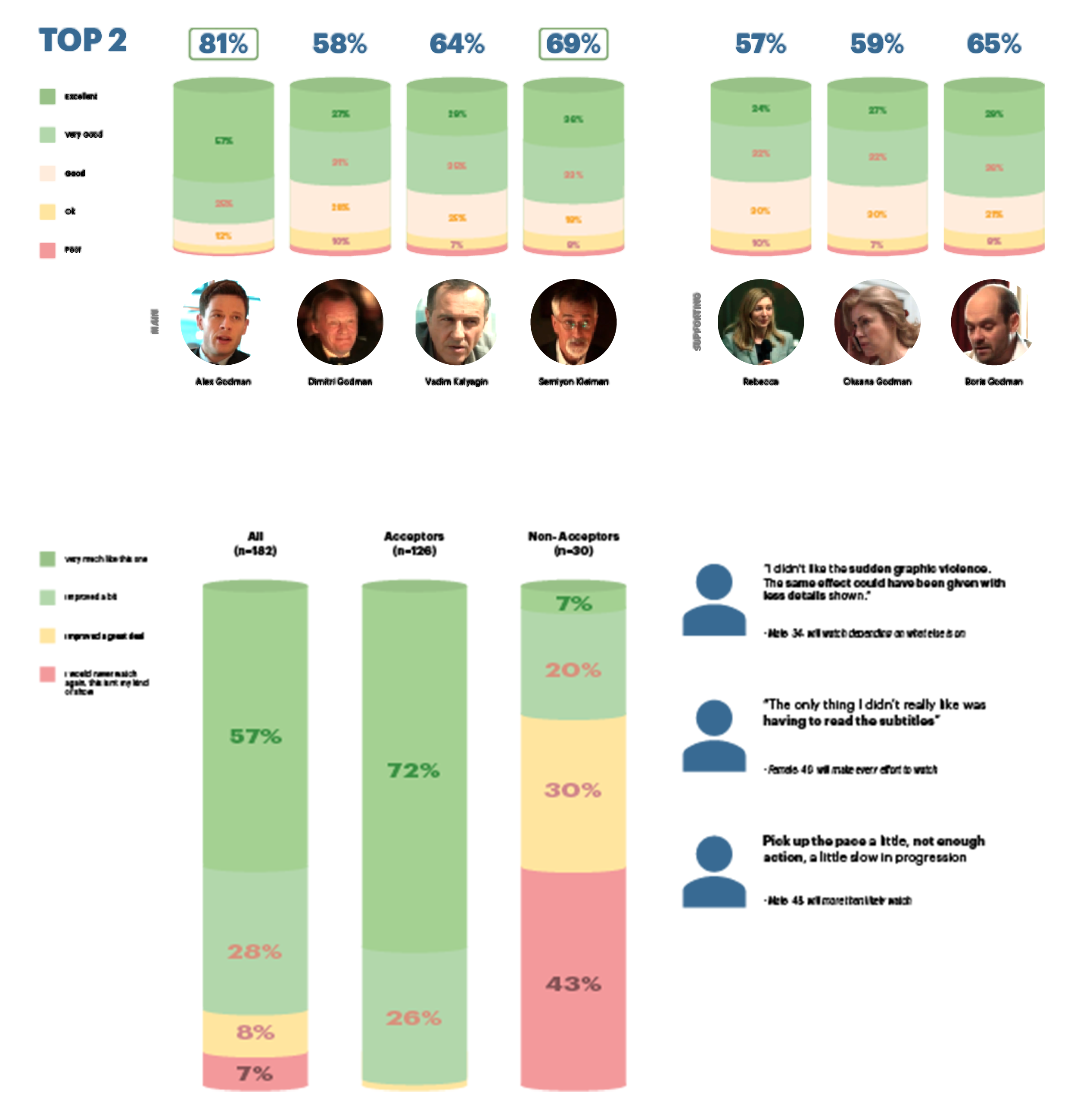 We found this show to have potential and our recommendations were threefold. The first was to reduce or eliminate subtitles, as they are one of the top reasons for tune-out. As the series goes on and viewers have already developed an attachment to characters and the story, more subtitles can be introduced, but in the beginning it creates a barrier to mass viewers adoption.  Next, the pacing was slow to 25% of viewers, who indicated they felt held captive in between the action scenes. If future episodes don’t keep the action flowing and ramp up the speed of character development, a portion of viewers are bound to tune-out. Finally, a hurdle to getting viewers engaged enough to watch the show in the first place is the title, which didn’t align with the expectations of many viewers. Over 25% of acceptors said they did not like the title of the show, while among non-acceptors 70% said they did not like it.  The title didn’t match the show for some, even after they saw the first episode.  A stronger title should be considered to potentially improve potential viewer engagement in regards to marketing efforts.  With changes in line with these recommendations, McMafia could gain traction as a new show on AMC.

Put Your Best Foot Forward With Your Pilot